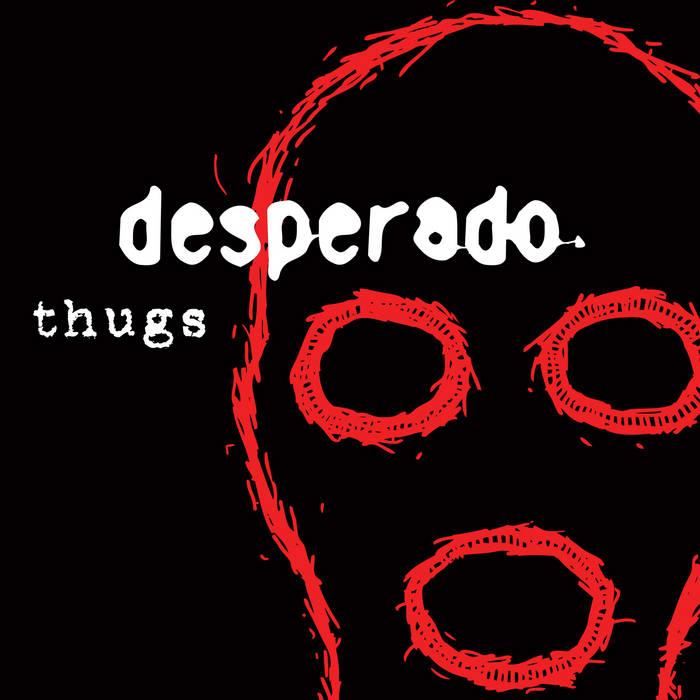 "Fucking hell this is a good record. Loaded with jagged riffs and snarling attitude and shot through with a ton of unforced melody, Desperado well and truly hit the spot.......this is an abrasive and accomplished record that demands attention from start to finish. Brilliant" - KKKK Kerrang 1/9/07

"with standout tracks proving even the darkest of hardcore can still be a dance anthem, this is a superbly engaging record" - RockSound issue 100 Sept 2007

"This is the music of an experienced band who know exactly what they're doing, which is creating dramatic and excellent music." - www.punkscene.co.uk July 2007

"high-energy hardcore punk, ‘Fehu’ is the first real signal that Desperado have matured as a band as it launches into guitar riff that wouldn’t be out of place on a modern Deftones record"
www.audio-democracy.com July 2007

"Listening to this is like watching a ballerina decimate a panzer division with tissues, real power, real beauty and real brutality...Thugs is a brilliant hard rock album" www.unpeeled.co.uk July 2007

"It’s loud, scream, shouty and very very hoarse. It’s a healthy slab of attitude, however, and cleared the cobwebs out of my head after a day of listening to corporate bullshit at work."
www.vanguardonline.f9.co.uk August 2007

"Desperado have a cracker of an album in Thugs. Whilst not being so light-hearted, it shows 11 songs which have so much passion and drive you’d be a fool to dismiss them. Each track has measured guitar breaks and clever melodies pitted against an extreme screamo vocal approach. This is violent, blood soaked hardcore for those disheartened with the world." theplasticashtray.co.uk August 2007
"Limited political sloganeering and dark, savage music has always been the stronghold of European hardcore, and while Gallows are dazzling those who have never seen a real punk band before, Desperado are leading the musical charge. They are more subtle and – within that parameter – that much more heavy. Think a popless Waterdown with an edge for the doomy and despairing sounds of Converge, as can be heard on the excellent A Tribute to The Living Dead and We Wash Our Hands In Blood. It's a larger-than-life record, one with slabs of decimating concrete and brutal sentiment. Brandishing a shovel and a growing army, they'll be digging your grave before you even attempt to find anything else better. You might be better off joining them than trying. It'll take you ages anyway." www.subba-cultcha.com Aug 2007
"Highly acclaimed Norwegian hardcore types are back with a new album which is shaped in such a way as to alarm pretty much anyone with a rock radar." www.subba-cultcha.com Aug 2007
‘Thugs’ is a good name for Desperado’s second record. It is a wantonly aggressive album. It doesn’t care who gets hurt in the process as it hurtles its way unstoppably to punk rock Valhalla. It is brazen and violent, it is loud and nihilistic. It does what it does and it does it well. Desperado take Refused as their template and then sprints off in its own brutal direction. They are no mere copyists though; they add some thick sludgy grooves and some danceable beats to keep things fresh." www.new-noise.net Aug 2007
"The album’s full of head nodding sing-a-long post punk songs, and I reckon the band would be a force to be reckoned with in a live environment. There’s almost boundless energy, and there are some meaty riffs to contend with". www.dieshellsuit.co.uk Aug 07
"this album is a whirlwind which will chew you up and spit you out the other side before you know what hit you. Gems such as the snazzily-titled 'Cut Some Slack For The Retarded', complete with vocals so infectious you'll sing (and scream) along even if you don't know the words, are bound to have you punching the air like an angry loon." www.rockmidgets.com Sept 07
'Thugs', the Trondheim band's second long-player, doesn't just come with the grit, snot, spit and venom to satisfy the purists but boasts moments of genuine beauty that will impress those looking for some brains with their brawn and hangs off enough well-produced hooks to ensnare plenty of new listeners too. There's nothing wrong with punk rock right now, nothing at all. But Desperado's particularly potent brand of dark heaviness doesn't half leave most other tattooed contenders in the dust. Brilliant stuff. moderate rock / simon t diplock Sept 2007

This is modern day hardcore punk at its best....it's hard, fast and slamming and the production is outstanding. Buy it steal it but most of all enjoy it. Bubblegum Slut Zine issue 28

All at once it's harsh, loud and obnoxious yet contains the hooks that will make you want to give it repeated listens. In fact some of the tracks are bordering on the anthemic. I guarantee that if you like punk or hardcore you'll dig this CD. Even if you don't give it a try...hell even I like it ! Powerplay Oct 07

“Deviant Hardcore given a millennial reworking, a stunning album that sits perfectly alongside ‘The Shape Of Punk To Come’…” www.subba-cultcha.com no 19 in the years top 20